The Secrets (Well Three at Least) to Loving Work

After several years, and especially decades of waking up morning after morning, commuting to the office, putting in your hours and returning home, it’s hard for people to view work as a place they’d actually want to go when they have some free time. It’s work. Some think it’s torture. Some think it’s only there for people to make a living, and worse yet, some think it’s just a place.

If you’ve ever heard the saying, “if you love what you do, you’ll never have to work a day in your life”, I’m sure you’ve tried to justify ways in which your idea of work doesn’t really mean ‘work’ to you after all. It makes us feel good to think that we love our jobs (and we all can, by the way).

The truth is, just like personal life, work life isn’t always roses and daisies either. Sometimes we have to make hard decisions, sometimes we want so badly to solve an issue, that we lose sleep beyond what we can ever make up. The same ups and downs happen in both life and at work, but they way people look back on them seems to be different.

When people ask you, ‘how’s life’, what do you say? What probably comes to mind first are any recent milestones: fun birthdays, marriages, family vacations, etc. But for some reason, when you ask someone how work is going, they tend to either just say, “good” (and that’s it), or bring up situations that didn’t play out the way they wanted. They complain about the small things instead of focusing on some of the big accomplishments. Maybe it’s because the things they have true ownership of seem smaller in comparison to the company as a whole, and some of the bigger business milestones are team accomplishments that they don’t feel they can claim as their own.

If some of the negativity does in fact come from employees not feeling like they’re truly in control of their own work, give them the tools to see how they make an impact on larger projects.

Example one: Provide a way for employees to give feedback

Are you needing them to follow a specific process? We know these processes are essential for everyone to be on the same page, but do your end users have any kind of say in that process’s creation? You might be surprised by who will comes up with the next solution that helps your process become even more of a success. Getting employee feedback could be as easy as creating a Google Form and sending it out via email or creating a poll on Google+.

Here’s another way: When Cloudbakers creates applications for clients, we provide a tab on the side of the screen (whether that be on the phone or desktop) titled ‘Provide Feedback’. During the testing phase of the project, users can click on that tab and are able to send in ideas that the team can then take into consideration when building or updating the application (or process in this case). 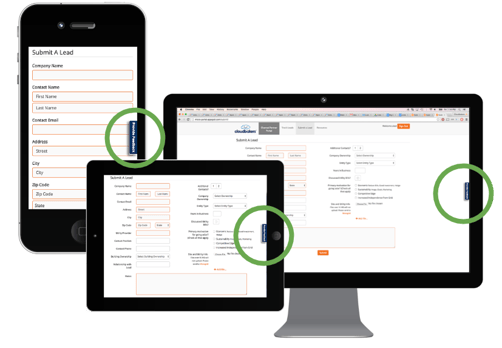 In fact, our very own team just finished the testing phase for an internal site. Every single person in the company had a say, in some way, shape, or form, in how the finished product looks and works now. Even for an application that I personally won’t be working with everyday, I have to say, it was pretty neat to see my suggestions come to life. Thanks Alex!

Have you ever lost some of your work due to separate version files? How cool is it to look back on a document or spreadsheet that you helped create and see just how much you contributed to that final product? For marketing, I’m lucky enough to have a lot of data (shoutout/thanks to HubSpot’s reporting tools) to see my progress as detailed or as broad as I’d like. Not every department has it that easy, though, so let’s look at another example. Below is a blog that I just Ashley-fied a bit in Google Docs. Everything in green is a change I made.

Let’s take a step back quick. Look at the picture above one more time. What I forget is so cool (because I’ve completely taken these features for granted) is the fact that I don’t just see the changes that I made, but I get to see everything that went in to this piece of writing. Normally a team member of mine writes a blog, and I edit it, add a picture and publish. But wait, if you look closely, Ben gets some credit in this too. Before I even jumped into the document, he made a change to Mitch’s draft. Way to go, Ben!

Remember earlier in this post when I mentioned that employees might have a hard time seeing their part within a larger project? It’s not always obvious to people why what they’re doing will impact a later result. With the ability to see the big picture, along with the exact steps that were taken to get there, it’s a lot more fulfilling to that employee in the end.

Even if your company isn’t quite to that top-level of collaborative productivity yet, whatever further collaboration you're doing now is most likely better than what you were doing yesterday. If you’re looking for ways to improve, check out our CEO’s 'Modes of Collaboration’ blog post. Work better, together, and have fun along the way!

Click the button above to join us at Google's upcoming online event -- all about team culture and innovation!

Author Bio: Marketer, Aquarium Volunteer and Minnesota Golden Gopher. Ashley is obsessed with productivity and communicating best practices to others so that they can be productive as well! She's directed the Cloudbakers Marketing team since 2013.

5 Ways to Always Look Stunning on Google Meet
Cloudbakers Expands with Strategic Merger: Meet Qwinix
Manufacturing Quiz: Are You Getting The Most From Your...
Quiz: Which G Suite Application Are You?
Where To Run Your Applications