Zoho Creator: Bridging the Gap between End Users and Developers 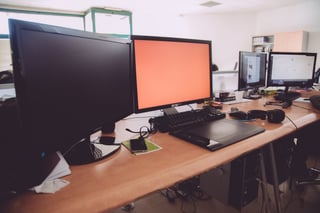 Since the time the IT industry boomed with the consumerization of personal computers, those with the passion and capability to learn development have held end users dependent. Years later, the success of current day businesses is now completely beholden to their internal IT infrastructure and processes. While long-time developers still run the show in these environments, lately we're seeing more and more beginners enter the game.

There is typically a long setup process before you write your first line of code. This can be a very daunting task for someone who has never coded before and very discouraging if (when!) something does not work as expected. If you are in a position that requires a lot of duplicate data entry you may be wishing there were an application to make your job easier. Many say to themselves, "Why don’t I just develop it myself?" Unfortunately, after digging into what it takes to create an application, and realizing how much time it takes to finalize a project, most people bail on that initiative pretty quickly.

But, with the fancy new tools around, that is changing rapidly.

For a little over 4 years, we’ve been developing applications on the Zoho Creator platform for businesses faced with the issues above. Still, it wasn’t until I went to the recent Creator Workshop in Houston that I realized how the Zoho Creator platform was changing the IT industry. Within the first couple hours of the workshop, users had built their own business application to order pizza. Though very basic, each user had a rudimentary database, workflows pushing data from one table to the next, references creating relevant table views, and the ability to create simple reports to show the inventory of what was ordered within their app. All without writing one line of code.

As eye opening as this was, the portion of workshop that began to dive into the code of the application was even better. With a room full of inexperienced, possibly first time coders, we dove into the first line of code, moving information from one table in the database to the next on a field update. One click to the workflow page and 20 characters later, the faces in the room lit up watching how their actions within the application coupled with their first line of code accomplished something that they have been doing manually for most of their lives. In no other development platform can you gather that type gratification so quickly as a beginning developer. As a high level developer with a little over 10 years working with code, I still chase the gratification of completing a long time pestering problem. This is one of the most encouraging ideas about development and is one of the greatest aspects of developing on such a platform.

Though this application only just scratches the surface of the complexity capable within Zoho Creator, it opens up the door for end users to begin to utilize their own skills to solve their own problems. For companies like ours, though complicated applications still take a significant amount of skill and strategy to develop for our customers, we are still capable of providing enterprise ready applications at a fraction of historical development prices. This grants us the capability to reach more companies, more often, and revolutionize the way they do business. What’s more gratifying than that!

What else can Zoho do? Check out Andy's running shoe app!

Author Bio: Director of Business Development, outdoor adventurer, and Packers fan. Shaun previously worked as our technical lead for CRM configurations. He's been to India to speak on behalf on Zoho and enjoys nothing more than helping businesses find solutions to make them more efficient in their processes.

Manufacturing Quiz: Are You Getting The Most From Your...
Where To Run Your Applications
Top Tips For Navigating Zoho CRM From Your Mobile Device
Remote Work Readiness Evaluation
3 Ways Zoho CRM Improves Data Integrity To Yield Better Accuracy...