Always ahead of the technology curve for new business applications, John joined Cloudbakers in 2018 to achieve his goal of joining a forward thinking organization which applies new technology to solving customers problems.

John earned his BA in Business Administration from Beloit College where he also competed for four years in basketball and was voted captain for two years. John has continued his professional development completing Professional Selling Skills, Miller Heiman Strategic Sales Courses, became a Board Examiner for the Illinois Foundation for Performance Excellence and earned his Google Analytics Certification in 2017.  He has been active in his community earning a U.S. Department of Justice Distinguished Service Award, Homeowner’s Association President, and Chicagoland Green Collar member.

The best decision he ever made was getting married to his wife, Margie. They've raised two boys who are both working in the technology sector. John lives in Glen Ellyn and has the absolutely best dog in the world, Calli, an American Black Lab. 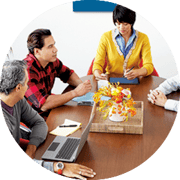 Cloudbakers connects technology with change management to ensure successful adoption of your cloud projects, adding value to your business. We unite with your team, turning your users into evangelists and projects into partnerships.

Stay up to date

Subscribe to our blog below:
© 2021 Cloudbakers LLC. All Rights Reserved.